St Blaize Marine is the dream enterprise of Ian and Ronèl Barnard, who make up the co-founders, company director and lead designer. Fishing and boating have always been synonymous with Ian. At the age of 16, Ian joined the navy to complete his year of mandatory military service. Upon completion of this year, he set out for Mossel Bay in the Southern Cape to join his father in the commercial fishing industry, the period during which Ian and Ronèl met. Not long after, Ian and his parents undertook the challenge of starting up and maintaining a flower farm. Being married by this time, the couple invested many years into the growth of the farm before branching out as separate business entities: with Ian starting up his own construction company and Ronèl likewise managing her very own florist shop. After numerous hardships and generally feeling unfulfilled and limited by their respective industries, Ian began to consider the prospect of pursuing his life-long passion for boating as a boat builder. Being a man of action, he soon made work of said considerations and was quickly joined by Ronèl, the two setting out on a shared endeavour once more, later to be known as St Blaize Marine. 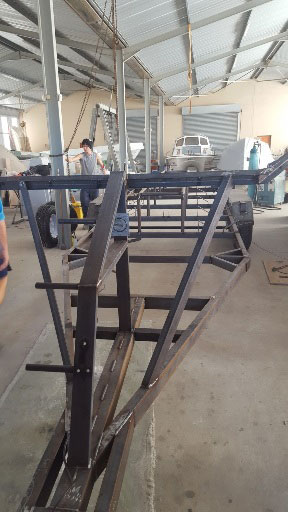 They were initially limited to boat- and boat trailer repair jobs, and though the change of scenery was welcome, they did not let their aspirations fade out there. In 2015, the first St Blaize Marine original design was drafted. This design was later dubbed the Eclipse 680 and would become the progenitor of the Eclipse Range. Two months following its inception, the first usable prototype made her maiden voyage. Ian, drawing on his years of experience in boating and construction, was solely responsible for the design. By the generosity of numerous small contributors, perseverance, strength of will and as Ian himself likes to recall, the unquestionable answer of prayer by God, the first prototype was constructed entirely by hand, by Ian and Ronèl themselves.

The magnitude of this accomplishment would only begin to dawn on them when the plug took to water for the first testing, surpassing not only their expectations, but also their wildest dreams. Regardless of what outboard motor was fitted to it, Ian’s design glided through any water conditions and delivered a ride that is unparalleled in handling and comfort, piquing great local interest. The plug was put through various tests to gauge the design’s efficiency before ultimately being sent back to the workshop for the next step: the aesthetics. Ian once again solely undertook the task of designing the curved aesthetics that co-characterize the boat alongside its performance.

In the winter of 2016, the very first finished Eclipse 680 had her launch in Mossel Bay. She was quickly spirited away to Mozambique for a month-long field test and again managed to repeatedly astound onlookers, long time boating enthusiasts and even Ian himself. Word of this new design got out and soon, renowned boating magazine Leisure Boating, called to review the design.The review can be viewed on the Leisure Boating website, by clicking here.

Furthermore, the success of the Eclipse 680 has led to St Blaize Marine obtaining the OEM (Original Equipment Manufacturer) dealership in Mossel Bay for Mercury, Lowrance, Raymarine and Garmin.

Today, there are Eclipse vessels housed in the USA, Australia, Mauritius, and Mozambique. With 5 models and more in bound, St Blaize Marine hopes and continues to go from strength to strength.